since the seminal funk/breaks/hip hop jam ‘The Breaks’ was started by Music Man Miles, DJ Organic of movie ‘Freestyle’ fame and MC Hymnl of Dark Leaf and a Cut Chemist collaborator. Carlos Nino was actually the first to bring turntables into the coffee house on La Brea and invite guests to come hang out and spin records sitting on a couch – w 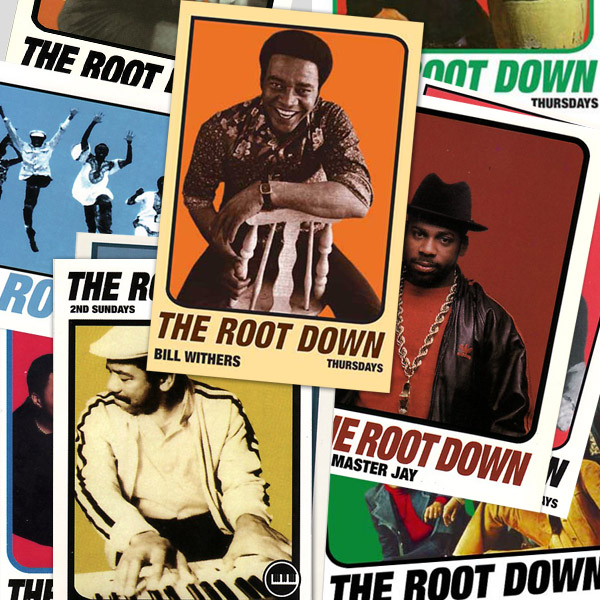 hich quickly evolved out of control in a good way. Ofcourse there were folks like Mear doing live art,the b boys and b girls flexing in a cypher the size of a coffee table, the various MCs like Thes One just hangin out or freestylin on the mic with the OG Breakestra band. The band included Rootdown co-founder Loslito of The Rebirth, Double G of Dakah, Damon Aaron, Dave Chegwidden of The Rhythm Roots All Stars, plus Todd Simon and Dan Ubick of The Lions. This is where Miles and Dusk met for the first time and would soon after join forces backing MC T Love live. This party roamed for half a year till finding its home on Tuesdays @ Pedros on Vermont in Los Feliz.

For an incredible 6 months at Pedros, funk/breaks DJs like J Rocc, Mix Master Wolf (cuttin up Zeppelin), Cut Chemist, and Marvski rocked the stage, and hip hop groups like Latyrx, Black Eyed Peas, Jurassic 5, Company Flow, Dilated Peoples and Freestyle Fellowship busted freestyle sessions while The Breakestra got down live on stage. Anyone remember Peace Pipe? I hear ya Araceli. Of course there were the heads who made it the jam. All the b boys and b girls who now had room enough for multiple cyphers on the floor and all the good folks there just to move and groove in their own funky way. This is the spot where you would find pre-Rootdown DJ DUSK (RIP) chillin, takin photos, Chuckchilla in the freestyle cypher, Sloe Poke just hangin out, Medusa, Ab Rude, and the whole darn family kickin it. Judd and Scotty Haulin that sound from the OC, real Gs! George of Jointz always bein real and always showin love. Many a night after at Freds 62, gettin that grub we missed while setting up the night. Alexis holdin it down at the door takin no shit! Janky muthas grabbin bottles from behind the bar givin us grief. But mostly the livest party we could have hoped for thanks to everyone in the mix. On and on…

Maintaining the weekly booking/functions of the night took its toll on the promoters, not to mention dealing with the semi-gangster biz of the venue (made much easier due to Loslito’s spanish skillz). The night decided to pause the record until the time was right to drop the needle once again.

After a few months, Loslito and Miles realized that there was a void in Los Angeles for even the most basic hip hop/funk/live music parties and decided to keep it movin by calling forth the funk in the name of Jimmy Smith via the Beastie boys. ROOTDOWN was MANIFEST!

Starting out as a twice a month event at the Atlas Bar in Mid Wilshire, they brought together the same basic elements of ‘The Breaks’. The first shows were with T Love, The Breakestra, DJ Sesquipedalian, Dilated Peoples and Nu mark – a well needed outlet for LA’s underground. It lasted two months till some fights killed it and Rootdown bounced for a little hiatus. Then Los & Miles found Gabah on Melrose Ave, at the recommendation of music promotion comrades, Shakspeare and Auerlito of Chocolate Bar and I n’ I prods.

After a few months of dialing in the family of DJs and bringin DJ Dusk in to mix, things came together, most notably on the night Cut Chemist came through to rock. DJ Dusk’s party hosting skills became apparent that night, not to mention his progressive,world eclectic approach to hip hop djing that not many were employing in sets at that time. After a couple of years, Los introduced Wyatt Case into the Rootdown. Los, already an occasional DJ, would get in the mix and Miles started to bring records to play early which began his excursion into DJing. The night however became centered around the sounds that Dusk and the night’s guest were bringin to the crowd.

Dusk introduced a lot of heads not only to deep Jamaican, hip hop/funk music, but also Latin sounds from Puerto Rico to Columbia that were not getting played anywhere else in town. When he said ‘there ain’t no other sound in town like the mighty, mighty Rootdown’ – he was not frontin. Of course that doesn’t mean ya had to like the sounds, but if ya liked funky organic, soulful music, you would more than likely tend to see it Dusks way in all his B boy braggadocious glory!

Some nights would just be the Rootdown Soundsystem DJs rockin sounds from back in the day and other nights would be broken up by live funk band or hip hop performances. For a brief time Los, Miles and Dusk started a live project they would break out for Rootdown called ‘The Rootmattics’, with Dusk providin beats cut up on the decks, Loslito on the keys and with MCs sometimes freestylin. Also for a brief moment, Egon of Stones Throw Records – who had just moved to Los angeles – joined the Rootdown Soundsystem dropping ultra rare funk records that no one had ever played or even heard in Los angeles before, much to the floorrocker’s pleasure. 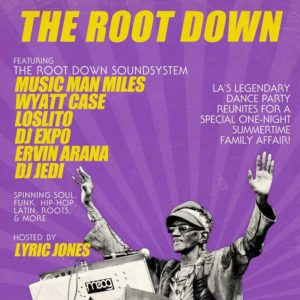 Nights at Gabah trying to find a parking spot, haggling with good ol Adnon for a drink ticket or two, lighting up in the patio without getting caught. Kofie and Mear blessing the stage with live freestyle art. Gladys the wonderful, always with a smile at the door and sarah as well (she met her husband there i heard). Brissa with the sunshine, kool ass Chris always in the spot. Of course the most Mex-I-Can mutha in the house, Boss Bean, Arturo holdin it down inside and out. No ya can’t bring in all the homies fool! Vinnie the ink master, keepin those baseball cards trading – posters shading. Basically quiet Wyatt bringin all his homies into the RD family. Thanks again man, for the love. Lets not talk bout those bathrooms! Too late. You all know what i’m talkin bout. That’s one of the reasons we had so much incense burning in that spot. Breakestra gettin that soul togetha live and on film. Aloe and Exile back before they had no name – pushin buttons, anyone remember? Shadow, Uncle Nu and Cut, Sugarman 3, Antibalas, People Under the Stairs featuring Baron von Thes. Freshly Los Angled PB Wolf, Zack Tripper the block rockin beat master from A to Z, Logic before the J, Haul and mason testing out those quad mixes live, almost every single Beat Junkie blessed us and that’s alot – ya know filipinos and their cousins! Oh yeah that’s right – sorry J. Hier with the Fiyah, Topanga homie! Bobby and his many degrees of soul, Rich Medina the marathon funker, Quantic on his first excursion out west, Malcolm Catto droppin funk heat on the decks, Blackalicious, Lyrics Born bringin that Bay Area sound to our town, Style Wars live on stage, Mona Lisa, Big Dada Daz always checkin and tryin to keep this thing we do out here honest, Crown City, been way too long since ya set fire, Burning Star, we miss ya! ‘ya never know who might drop by in the mix’ YOU were there and if YOU weren’t, this is that taste, better later than never.

A few years into it, Dusk and Miles were chillin after another night of Rootdown and came up with the idea to do a live beat maker exhibition/battle inspired by the Jamaican sound clashes that Dusk was especially aware of – having studied the art of DJing inside and out, from the street to the art college text book. Dusk had also been teaching a ‘DJ as the post modern musician’ class at UCLA. That night they conceived of the first Rootdown Soundclash and set out to manifest it. First inviting Cut Chemist and Madlib to do their thing and later Thes One, Will-i-am, Exile, Ohno, Stro of the Procussions, and Newman of Giant Panda. During this time longtime friend chuckchilla, mc/beatmaker of Gershwin BLX crew joined Rootdown to deal with the booking.

After 6 great years of rocking Gabah, Rootdown decided to head a little further east to the Little Temple. After setting it off with DJ Numark, they were in motion again now with two rooms to rock, which allowed room to expand the Rootdown Soundsystem to include long time friend and occasional guest DJ Sloe Poke, Ervin of the Rocksteady Crew and Dj Expo, who Los again invited into the mix to bring his deep crates and skills. If you get to Rootdown early, you can hear him in the main room dropping jazz, rare groove, roots, dub, and soul records you will be hard pressed to hear coming out of a pa system anywhere else in town.

In 2006 the Rootdown family and the world tragically lost our dear brother DUSK after he was struck by drunk driver. We were very close to saying thats it, kill the record – but we know in our hearts DUSK would want Rootdown to keep on rockin in his name. There will never be another Tarek ‘DJ DUSK’ Captan at Rootdown, or more importantly in this world, but we can keep his sounds and spirit moving that we feel compelled to share with folks each and every Thursday night in the groove that we call life.

Thank you to all past and present artists, supporters, friends, and family who have participated in this love and sound we call ROOTDOWN! 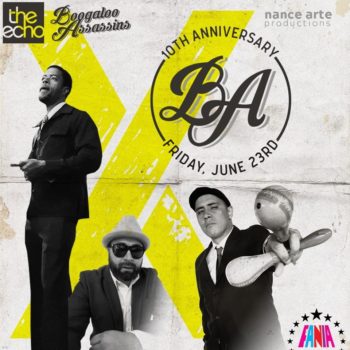 The BOOGALOO ASSASSINS celebrate their 10 years of making the real-deal-holyfield classic Latin Boogaloo, Latin Soul, Salsa and Latin funk style of the 1960’s and 1970’s – Friday at the Echo June 23. You might have heard their Mambo version of the Dawn Penn classic “No No No” that’s become as Ubiquitous in certain circles […]

Despite the chill and drizzle, the Root Down celebrated its 15 years in incredible fashion. An event that captured what Root Down has brought to the stage over the years, showcasing the broad range of styles and cultures its nurtured. Iconic soul singer Syl Johnson rocked with the Breakestra, The Beatnuts mashed it up with […]

The events biz has changed quite a bit in the past few years. Party goers have been tighter on their budgets and choosier on what they want to experience. Even the Root Down, going on 13 years and one of the originals of the under ground soul, funk and hip-hop has had to adjust to […]