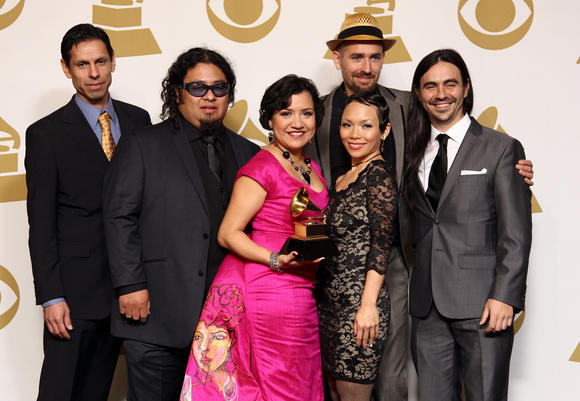 Flying under the radar during Grammy time and not shown on national TV are artists receiving the award that truly deserve the spotlight for their commitment to their artistry. QUETZAL has been a Los Angeles staple for close to two decades and finally got recognition for their work. Congratulations!

Quetzal, the L.A. band that weaves together funk, rock and regional Mexican folk-music varietals such as son jarocho, has won the Grammy for Latin rock, urban or alternative album.
Quetzal won for its release “Imaginaries” (Smithsonian Folkways Recordings), a characteristically ambitious foray into cumbia, neo-’80s-style R&B, Cuban charanga and Brazilian pandeiro, charged with the band’s collectivist political passion. It is the band’s first Grammy.
(FULL STORY)